At the turn of the 20th century, Los Angeles had a population of about 100,000 people. In the middle of it all was the wealthiest neighborhood in L.A, West Adams Heights, located just west of downtown Los Angeles, and in recent terms just south of Koreatown. Architecturally, West Adams Heights had elaborate homes in practically every style, from Queen Anne and Victorian to Beaux Arts and Craftsman. Someone once described the central neighborhood as “an island in an ocean of bungalows," referring to the more common style in the rest of L.A. This was just before the start of Hollywood, so the wealthy residents of West Adams Heights were mostly titans of industry, like oil barons and bankers. 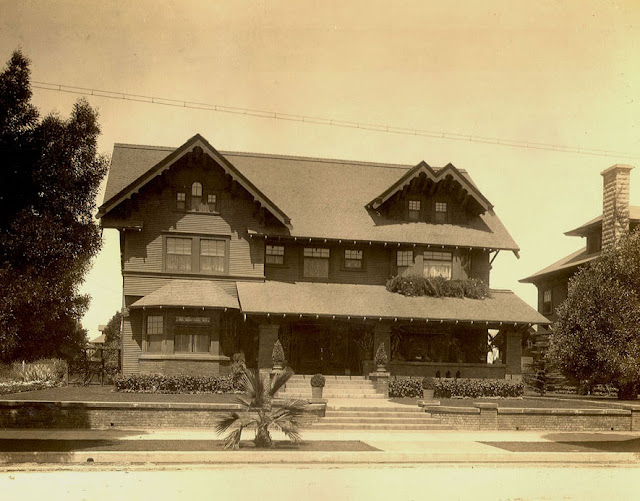 The neighborhood changed in the 1910s as the film industry moved to Los Angeles and actors began making their fortunes. They got off to kind of a rocky start, with older residents trying to prevent actors from moving in, but West Adams Heights was soon closely linked with the film industry and its stars. Whatever icons of the silent film era you can think of, they were probably living, or at least partying, in West Adams Heights. Charlie Chaplin and Buster Keaton were regulars at ‘Fatty’ Arbuckle’s huge parties, and later on, Judy Garland and Mickey Rooney would frequent parties thrown by the director Busby Berkeley, who moved in during the late 1930s. Busby wouldn’t have had many neighbors, though, as many West Adams Heights residents would move out in the 20s and 30s. This was in part due to the development of a new neighborhood for the rich and famous- Beverly Hills. The arrival of the Depression in the late 1920s also meant that a lot of residents of West Adams Heights were forced to sell their homes, basically taking whatever money they could get. The rush to sell also meant that the restrictive covenant that had been adopted before all this, the one forbidding white residents to sell or rent to African Americans, was not the first thing on sellers’ minds. So, black families began moving into West Adams Heights.

The black population of West Adams Heights started taking off in the late 30s, after the Depression, when many of the historic mansions were still up for sale. Middle and upper class black folks from L.A and other American cities began making their homes in West Adams Heights, renaming it ‘Sugar Hill’ as a tribute to Harlem. Sugar Hill became an icon of black Hollywood, acting as the home of stars like Hattie McDaniel, who won an Oscar for her supporting role in Gone With the Wind, and Louise Beavers, who was popular for playing maids in several films including Mr. Blandings Builds His Dream Home. Mr. Blandings was essentially propaganda for white suburbia, which was booming at the time (How To Kill A City, 157). Meanwhile, Louise Beavers and her neighbors would soon become involved in legal action that would find restrictive covenants, like those keeping the suburbs white, unconstitutional.
By the mid-1940s, around 57 black families lived in Sugar Hill. However, white residents were upset that the old restrictive covenant was being violated, so they sued to have the black families evicted. Black residents began organizing. Hattie McDaniel held meetings at her home to plan their defense. Loren Miller, the attorney representing black residents of Sugar Hill, argued that racially restrictive covenants were a violation of the 14th amendment. The presiding judge agreed, and in a historic legal victory, became the first judge in American history to find racially restrictive covenants unconstitutional based on the 14th amendment. Loren Miller would go on to argue Shelley v. Kraemer, another landmark case dealing with racially restrictive covenants which would go to the Supreme Court in 1948. That case would determine that racially restrictive covenants were unconstitutional, paving the way for the Fair Housing Act twenty years later. But, again, new developments began drawing residents away from Sugar Hill. This time Baldwin Hills played a major role, attracting wealthy black actors and filmmakers beginning in the 1950s. So, we see the same cycle as Beverly Hills, with a second generation of residents. This period of decline made the neighborhood vulnerable to local planning interests. The Santa Monica Freeway was constructed through the middle of Sugar Hill in the early 1960s (The Color of Law, 130). This was a huge loss for the black community of Los Angeles and of the United States as a whole, where black neighborhoods were routinely destroyed in the name of modern infrastructure projects, particularly highways.


Urban planning has been historically racist and damaging to communities of color, and this is just one example. Central Park was built on one of the most stable integrated neighborhoods in New York City. The 15th Ward, a poor black neighborhood in downtown Syracuse was split in two by a highway in the 1950s. St. Louis bought out middle class black families in Kinloch in the 1980s so Lambert Airport could expand. Robert Moses, the notoriously racist and generally destructive urban planner from New York, divided and destroyed neighborhoods like the Bronx in the name of highway construction. There are countless more examples of the role urban planning has had in the 20th century in segregating cities and setting black communities up for failure.

These days, Sugar Hill is getting some much-deserved attention. People began repopulating the neighborhood in the 1980s, and that new generation is taking strides in protecting and restoring the historic homes in the neighborhood. A lot of the information I used in this story is from articles on the West Adams Heritage Association website, if you’d like to learn more. If you’re interested in how federal policies segregated American cities in the 20th century, I highly recommend Richard Rothstein’s The Color of Law.

Works Cited
Richard Rothstein, The Color of Law: A Forgotten History of How Our Government Segregated America (2017).
P.E. Moskowitz, How To Kill A City: Gentrification, Inequality, and the Fight for the Neighborhood (2017).